Transformation Through Jesus, our Joy

This Sunday, we observe All Saints Sunday, that day when we remember the loved ones who have joined the company of saints over the past year. Tragically, this year is particularly difficult, given the pandemic that has kept us separate from one another, and especially for those who lost a loved one during a time in which communal remembrances have been nearly impossible.

Because of this, I have not chosen a Requiem setting for the musical portions of the service. Instead, I was drawn to the most magnificent of Johann Sebastian’s six motets, “Jesu meine Freude” (“Jesus, my Joy”).

After serving a church in Mühlhausen and then two royal court positions in Weimar and Cöthen, Bach was appointed as cantor and director of music at Leipzig’s prestigious Thomasschule in 1723, where he worked for the remaining 27 years of his life.

In Leipzig, Bach was able to reach his full musical maturity, composing both the St. Matthew and St. John Passions, three complete cantata cycles comprising nearly 300 cantatas, and at least five motets — not to mention the organ and instrumental music. Though the motets may be small in number by comparison with his cantatas, they constitute some of the most daring music ever conceived for choir.

Scored from five to eight voices, each in its own way demands the highest levels of virtuosity of the singers. Bach uses the voices to create complex musical textures that present deeply spiritual explorations of the texts. 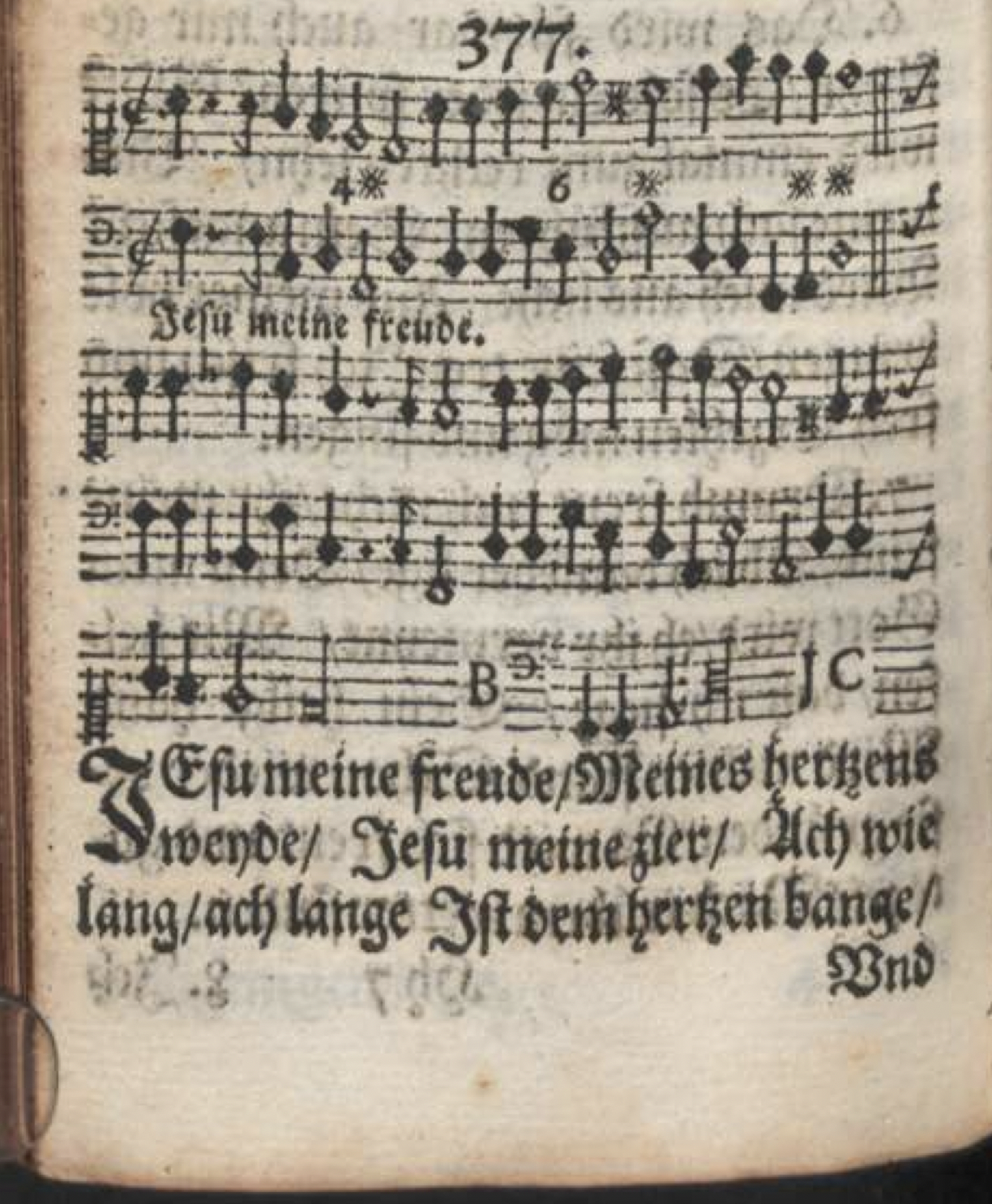 Jesu, meine Freude (BWV 227) is the longest and most complex of Bach’s motets. It was composed nearly 300 years ago, in 1723, for the funeral of Johanna Maria Käsin, the wife of Leipzig’s postmaster. Lasting about 19 minutes, it is made up of 11 movements, that alternate the six stanzas of Johann Franck’s 1653 chorale with texts from Romans 8. (This chorale may be found in our hymnal, #830).

The movements are arranged to form a palindrome around the sixth movement, with the four-voiced harmonization of Johann Crüger’s chorale melody heard in the first and the final movements. This sixth movement, a grand five-voice fugue, articulates the motet’s principal theological message: “Ihr aber seid nicht fleischlich, sondern Geistlich” (“You are not the flesh, but the spirit”) — that faithful Christians are equals, as the living embodiment of God’s spirit.

Throughout the work, Bach engages the listener (his congregation members) by weaving together scriptural and chorale texts with incredibly expressive music. The theme of transformation underpins the work throughout all 11 movements. For example, many of the individual movements begin in a minor mode and conclude tonally with a major resolution. This “minor to major” transformation is a symbolism for the Christian faith.

The progression of texts and music fully expose our weaknesses and fears, but Bach always resolves them — a symbolic representation of his faith in the comfort of the God who loves us. Ultimately, Bach points us upward to God in Heaven, the ultimate source of comfort in this life and the next.

May each of you be reminded that Jesus is our true joy, this Sunday and indeed, every day of our lives.